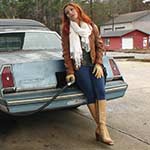 Monte Carlo is gassed up and time to go get another one. She heads back to our makeshift car lot and when heading up the old goat trail, her rear tires start spinning on the cold, damp ground. She’s trying to keep her speed up as much as possible by feathering the gas and that on-off of the gas stalls the car out.
“Damn!” she gently pumps the gas pedal to get the car started again and once she eases onto the gas pedal, you can hear the tires spinning again but she is moving forward. The car stalls on her again and is harder to get fired up but she’s able to start it once more and finally makes it over the crest of the hill to parked.

Now that is done, time to walk over to the old ’74 Coronet and see if it’ll start…