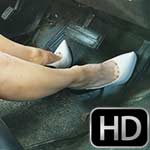 She’s wearing a white turtleneck sweater, a short black skirt and black/white platform pumps while trying to get the Coronet started. She has to swap cars and seeing as how stubborn the Coronet is being, it’s obvious why. She struggles for a bit before finally getting it going and she drives to where the Monte Carlo is parked. She changes into red loafers and fires up the Monte Carlo. She has to get it turned around in the tight spot before getting on the road to head back to HQ.