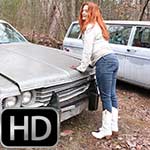 It’s the last day of shooting with Vivian and she gives you a run down of some of the stuff she did while she was here. As she tells you about it, she’s walking to the Coronet to give it and the Bug one last go before packing up and heading home.