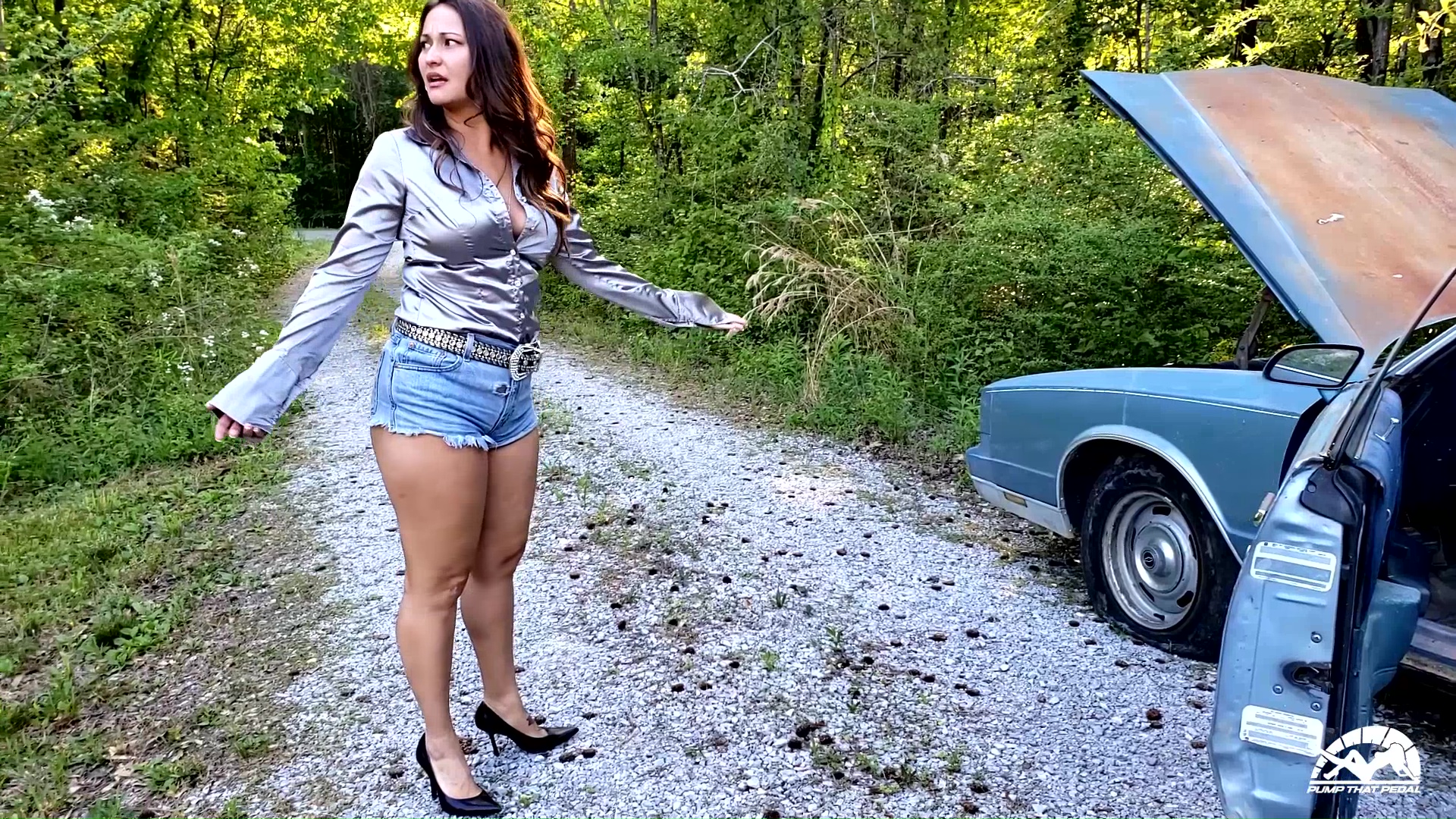 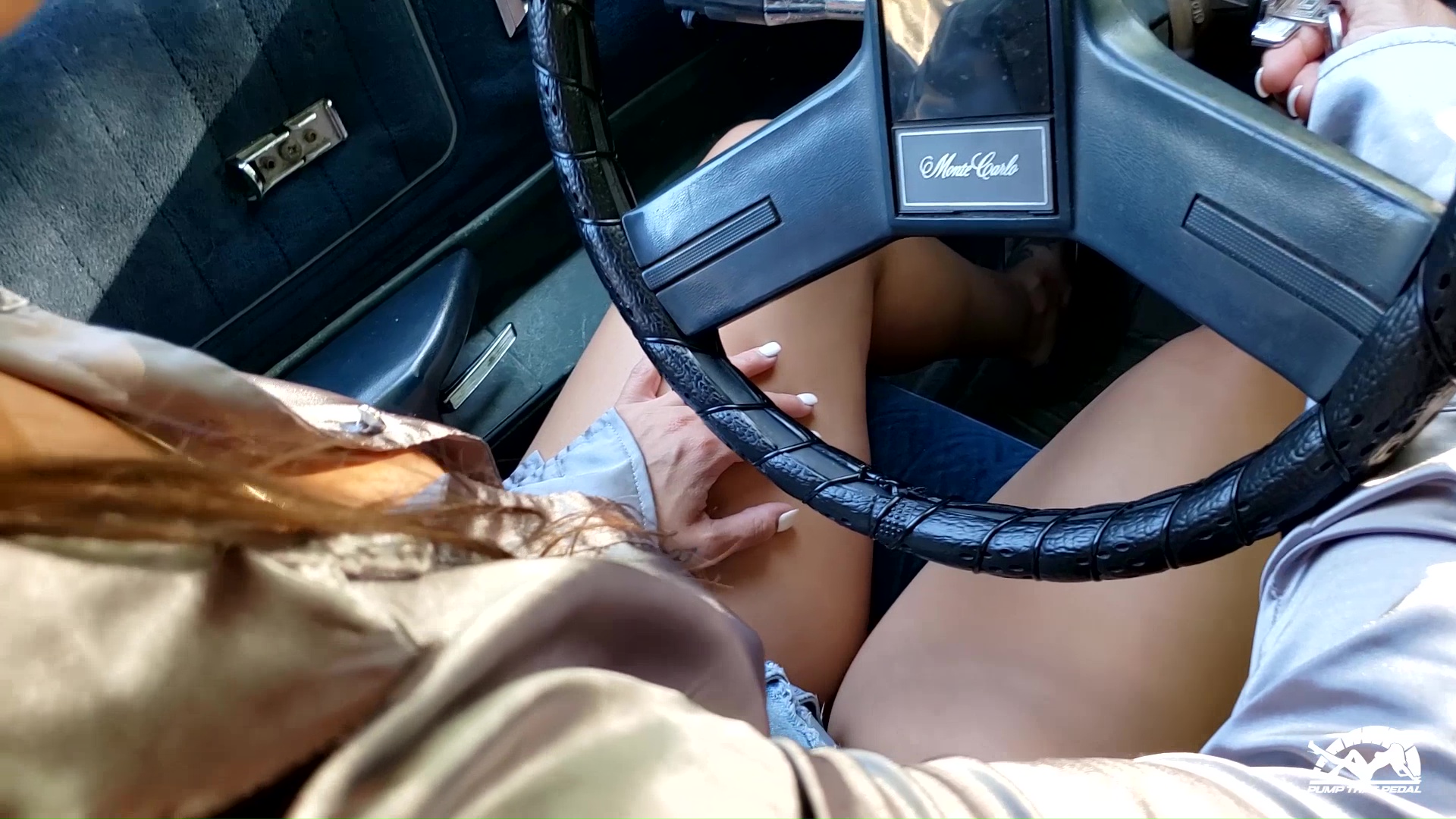 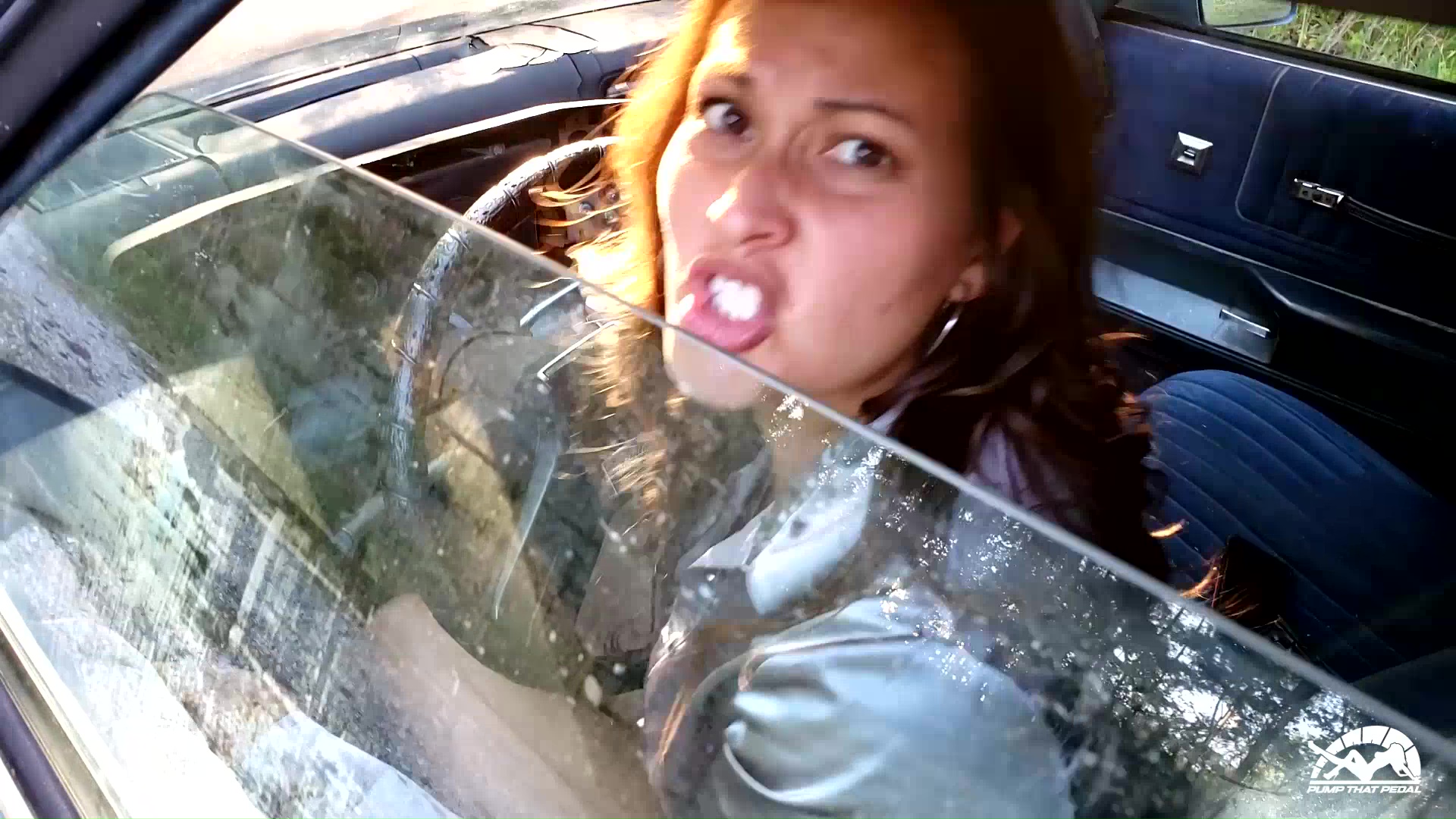 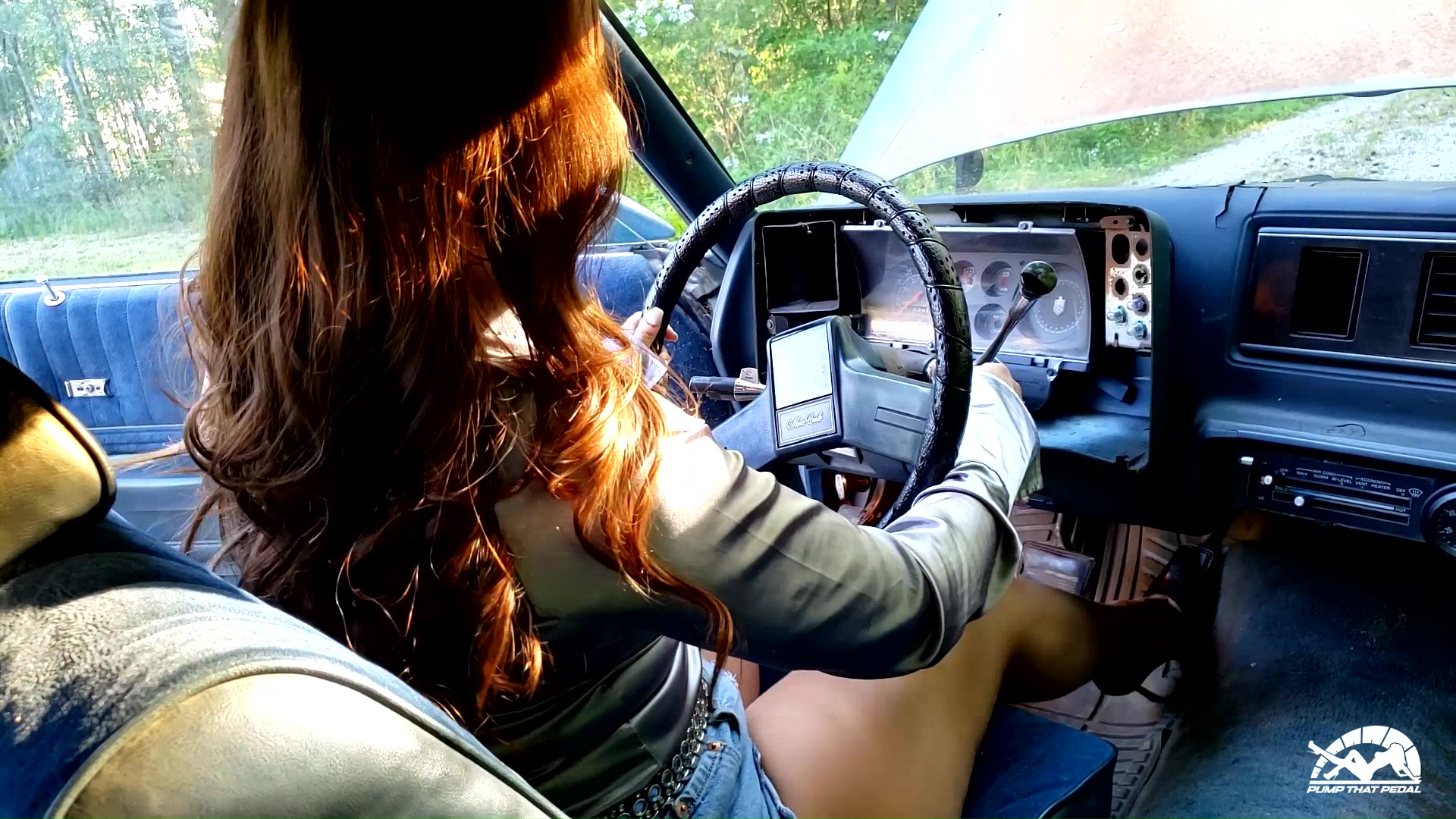 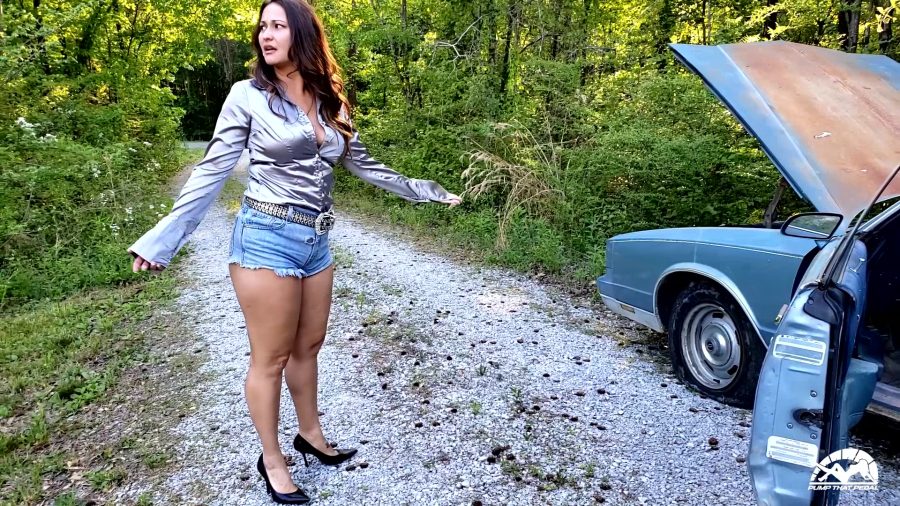 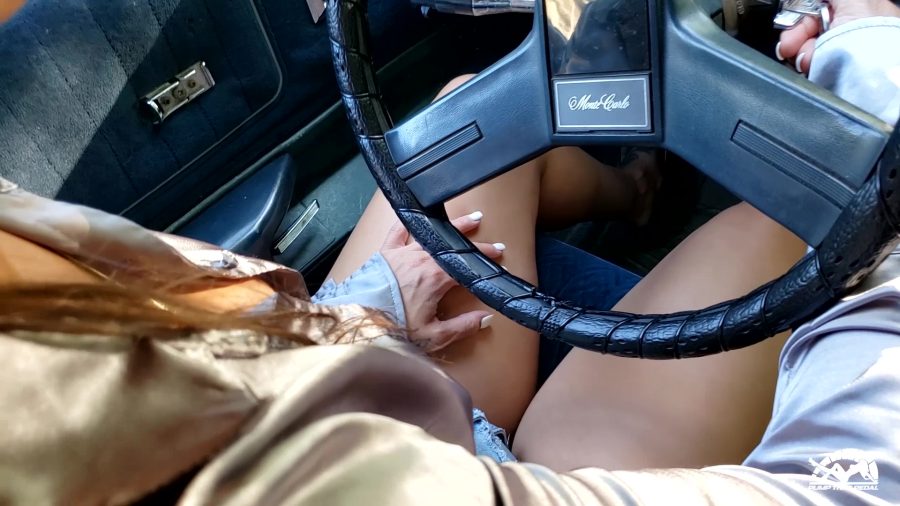 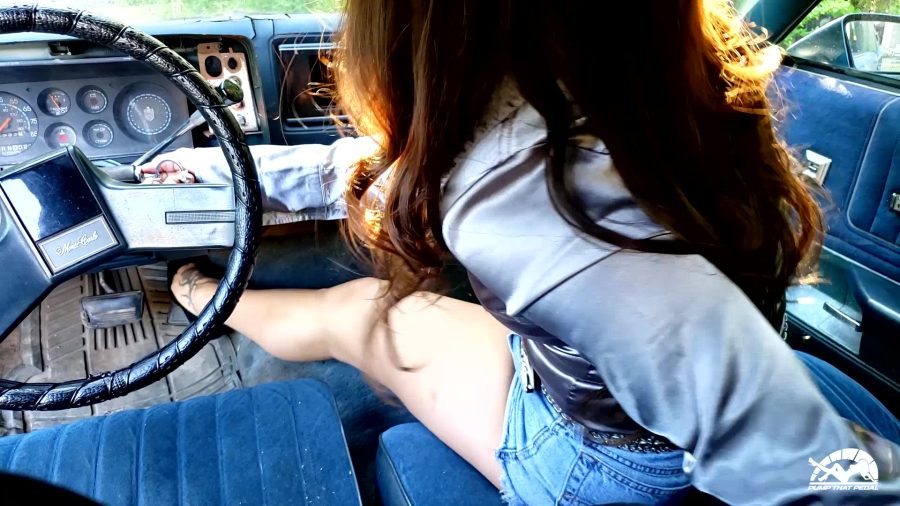 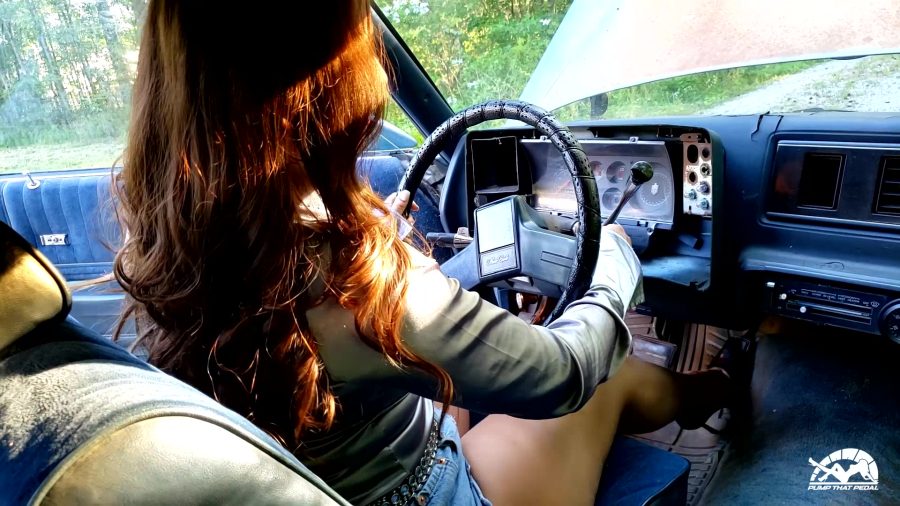 Outfit & Shoes
I would like for Jane to wear that sexy, super-short black leather skirt she has worn in several of her videos, most recently the one posted do the site where she is driving the dying BMW. The top should be sexy and go with the skirt; the button down blouse is great. Her shoes could be some sexy pumps or other heels that go with the outfit; as long as she can pump the gas easily. Hopefully it is not too chilly for bare legs. If it is, some pantyhose would be OK but bare legs are my preference.

Scenario
-Camera Angles, Action:
The video will be mostly filmed from the backseat with a couple of brief outside the car shots. When filming from the back seat, the camera should get full body shots with some close-ups on her legs focusing on her bouncing thighs. As usual, I would not want any feet close-ups. If possible, it would be great if this could be shot in the late afternoon as the thought is Jane and her boyfriend are heading out on a date. It doesn’t need to be dark so we can still see, but the afternoon makes more sense than mid-day. Also, even though they are supposed to be in the middle of nowhere, the video can be filmed halfway down the driveway near the woods, as long as the house or the other cars don’t get seen (of course if you want to go to a lonely road, I won’t object!).
The Camaro should be rigged not to start at all. Jane will be acting as if she is taking instructions from her boyfriend (unseen and not heard) on trying to start the car. Jane is a great pumper so she can just do her thing with full leg pumping (no ankle pumping) and some holding to the floor mixed in. Please be sure the seat is adjusted up far enough so she can comfortably reach the pedal without stretching and we get good leg action.

Script:
The thought is Jane and her boyfriend are heading out for a date in his old hot rod which has broken down in the middle of nowhere. He winds up ‘disappearing’ from behind the hood, but it turns out he is playing on joke on her to scare her. I have some requested dialogue but as usual, she doesn’t need to memorize anything, just as long as we get the idea.

The video begins filming from the backseat with Jane sitting in passenger seat. The driver’s door is open and the hood is up. She is a little annoyed and is looking at her phone to kill time while her boyfriend works on the car but she discovers there is no cell service, which she comments to him about. She then acts like he tells her to turn the car over so she reaches over and cranks the car. When it doesn’t start, he releases the key and sinks back into the passenger seat getting more annoyed.

After a moment she acts like he is giving her more instruction so she says “OK” and reaches her left leg across to the gas pedal then turns the key while pumping the gas with her left foot. When it doesn’t start, she releases the key and says: “Just a minute!” She crawls across into the driver’s seat and then begins trying to start the car over and over again. She should act as if she is listening to his instruction to crank it over, pump it and hold it, etc. Maybe she nods some, maybe saying “OK”, whatever she thinks is natural. At one point she mutters to herself, “If he wants me to pump it, I’ll pump it,” and she starts hammering on the pedal as she cranks the car over. Then she releases the key. And sits back in the seat.

After a little bit of time goes by she calls out to him and asks him: ‘What now?”. He doesn’t answer. She asks again. And again. When he doesn’t respond she gets out of the car. The camera should fade at this point.

When the camera fades back in it is outside the car and is filming her as she goes around to the front of the car. She is very puzzled and looks around for him. She calls out to him again. She calls out again and says: “This isn’t funny!” She is now getting a little freaked out. She slams the hood and hurries back to the car. The camera fades.

The camera is filming from the backseat again as Jane gets in and locks the doors. She begins hurriedly trying to start the car over and over again, pumping it hard, holding it down, pumping it some more, long cranks, short cranks. She is freaked out but trying not to lose it. Near the end of the video, the camera fades as she is still trying to get it started.

The camera fades back in and is the POV of her boyfriend, sneaking up from behind on the driver’s side. He pauses and watches her cranking the car for a moment and then knocks on the window. She jumps and then sees that it’s him. She calls him a jerk (or something else) as the camera fades.