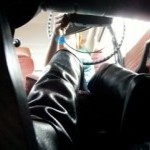 Annette is starting the Volvo while I peek under the hood.  The choke has been acting up and I’m tinkering with it while she puts on a little show.  She does some good begging in this video as she softly pumps the gas pedal.  Two cameras capture her working the key and gas pedal in her sexy boots!

One thought on “Annette Cranking Volvo in Black OTK Boots”