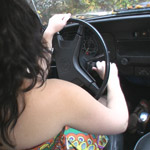 Audrey Tries Starting the Bug on a Rainy Day in Wedges

Most of these cars don’t like the rain.  The humidity messes with a lot of the old, rusted electrical connections in the ignition.  Audrey walks to the car quickly while the rain has slowed a bit, gets in and begins her struggle to get this old VW running.  She pumps the gas pedal quickly with her small, size 6 foot while wearing some brown leather, low-wedge strappy sandals.  She gets the car to sputter a few times but never gets it to start.