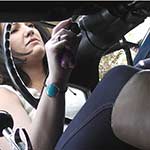 She gets in the Bug to see if she can start it up.  It’s been sitting for about a week, so hopefully the battery is good because she’s gonna need a few minutes worth of juice from it to get this car started.  She pumps on the gas in her flat heeled riding boots and does get the Bug started after a good bit of battling with it.  She revs it up and as she’s filming her boots working the gas pedal to rev the motor, the car sputters and stalls out.  She tries getting it started again but it’s too flooded now.

3 thoughts on “Audrey Cranks & Revs the Bug in Riding Boots”