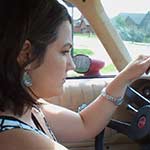 This clip has a lot of good stuff in it:  cranking, stalling, revving while driving, fast back road driving and it’s all done by the lovely Audrey!
She just wants to go for a cruise in the Camaro but has trouble starting it, which is typical.  She does have some experience in the old Z/28, so she manages to get it to bend to her will.  Once she hits the road, she’s not afraid to get it up to speed!  She puts them sexy red patent pumps to work, going from the gas to the brake like a pro.  When she’s coasting, she pops the gear selector into ‘N’ and revs it up, she loves to hear that motor roar!!  It’s not all fun and excitement for her as the car stalls more than a few times on her trip.  Imagine getting stuck behind her and hearing her crank that motor over, seeing her head bob up and down from pumping the gas pedal…such a sight! 🙂