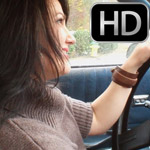 It’s a nasty day out but Audrey has to leave.  She scurries into the Monte Carlo so she doesn’t get too wet and buckles her seat belt.  It takes her a couple of minutes to get the car started but once it’s running, she revs it for a second to clear it out and backs out the driveway.  The roads are slick and she ends up peeling out when punching the gas after she backs out into the road.  While approaching a stop sign, she hits the brake too hard and the car sputters to a stop.  It takes some work to get it started but she manages and continues on her way.

We’re glad to have this awesome lady back after a 5 year absence!  🙂