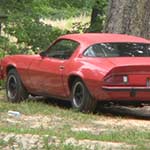 Our newest sisters are going to do a bit of shopping and errands in the Camaro.  Christal is going to drive but if she can get the car cranked first.  The Camaro spins over and over while Christal pumps the gas mildly, not wanting to flood it.  She knows how temperamental the old Chevy can be and hopes her mellow coaxing will make it fire right up.  She’s getting more frustrated while her sister, Gianna, tries to keep her calm so their situation doesn’t get worse.  Unfortunately for Gianna, their situation hits bottom when the Camaro starter siezes up.  Fortunately, Gianna has her old car there at Christal’s house for some work but since it’s not torn apart yet, Gianna suggests they take it instead.  With that said, they get of the Camaro and leave it to get looked at later.