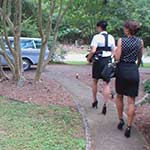 Christal and Gianna are leaving for work at the same time this morning.  Each lady is wearing some super sexy stiletto pumps with skirt a sexy blouse.  Christal gets in her old Bug while Gianna hops in her Volvo.  Both of them have some troubles starting their cars as we go back and forth to watch them get their car started.  The struggle for a bit but both finally manage to get their vehicles running and hit the road.  The girls have different destinations and we get to watch them both as they drive their route.