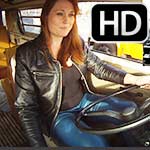 If you watched the clip of Cassandra driving the Camaro, this 2 part series shows you what was going on with the rest of us.  Keep in mind, Cassandra was leading and didn’t have a cell phone.  So when the Bus broke down, Cassandra had no idea and kept going to the place we all were originally driving to.
This video starts out with Dirty Diana driving the Bus while following Cassandra.  Diana is a bit rusty in the Bus and her platform, peep-toe stiletto sandals aren’t making it any easier.  A red-light causes Dirty Diana to get split up from Cassandra and as Diana is trying to play catch-up, the Bus decides to take a crap while going up a long, gradual hill.  She pulls over and the rest of this first part is her and Scarlet trying to get the Bus running and movable so they can at least limp it back home.  Lots of cranking, stalling, pumping all 3 pedals, talking and authentic distress.