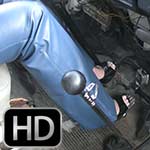 Now, let’s watch all the fun from a different camera angle!  If you haven’t seen the first part, you should check it out here!