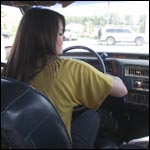 Erika & Veronica are done shopping and about to leave.  They both change into a new pair of boots they bought but as Veronica is trying her new pair on, Erika is trying to start the Cadillac.  It doesn’t want to crank and she’s a bit nervous since she’s now in a crowded parking lot.  The car sputters and she backs out of the parking space but then it dies and won’t start.  It takes her a bit to get it going as Veronica coaches her a bit.  They are then able to head out of the parking lot but the car dies twice before they get to the road.