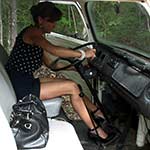 We debut Christal’s sister, Gianna, in this cranking custom video.  Gianna is late for work and her old VW Bus won’t crank.  We watch her struggle with this bus from both the passenger and drivers side as she pumps the floor mounted gas pedal in her black leather pumps with an ankle strap.  She gets it to sputter and start a few times but it keeps stalling.