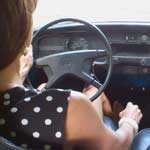 Gianna is driving the old Bug with her sister, Christal, riding shotgun.  The girls chat as Gianna pilots the Bug around with a lot of shifting, braking and a few issues here and there.  Her tanned bare legs and bright pink toes show up well against the black carpet and Christal adds some sexy teasing with her stockings near the end of the drive.

One thought on “Gianna Driving the Bug Barefoot with Christal”