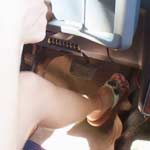 She’s sportin some short shorts, flip flops that show off her pink toes and a sexy tank top.  She’s got the Monte Carlo really flooded from a little….no, from a LOT of pumping the gas pedal!  She’s getting frustrated with the car not starting.  She does get it running near the end and revs it up pretty good!