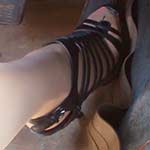 It takes her more than a couple of tries to get the Monte Carlo started.  It’s more like a few minutes…but she does get it fired up in her strappy black stiletto sandals, tan pantyhose and red dress.  She romps on it a few times to make sure it’ll stay running, pulls out onto the road and mashes the pedal down!