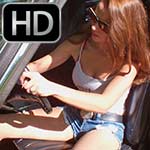 She first tries starting the Coronet…lol, yeah, right!!  She kills the battery in it!  So now she’s going to start the Monte Carlo and go for a drive.  After a nice, long struggle, she gets it running and off we go!