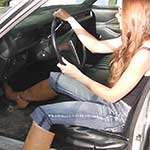 Gina’s not too thrilled to be taking the Coronet but she’ll deal with it.  She asks you if it’s going to start before she gets in and your lack of response doesn’t give her much confidence.  She does get the car started after some struggling and then revs the Coronet pretty good to hopefully clear the cobwebs out of the engine.  She slips her boots off with about 2 minutes left and does some barefoot revving showing off her pink toenails.