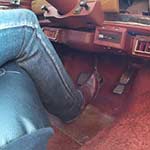 They got the clip started in the first clip and now Gina is driving it to where our cars are parked. Her and Scarlet chit-chat while Gina drives the big old Jeep. Her maroon vintage leather boots work the gas and brake pedal while Scarlet fights the sun filming her boots on the pedals.

One thought on “Gina & Scarlet Take the Jeep If It Will Start, 2 of 2”