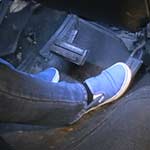 Hana is giving a classmate a ride home.  They’re both taking some night classes and as they walk to the car, the cold is getting to Hana a bit.  Her car is temperamental, so it takes some work to try and get it started.  She reassures her friend that it’s no problem but as the battery dies, it looks like they’re in some real trouble.  The have to find someone to jump them off, which they do and they’re finally on their way home.