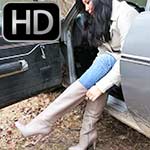 Hana Cranks Up the Coronet in New Nine West Boots

We had just had some sweet new boots sent in and Hana wanted to break them in. She has them in hand, walks to the Coronet and sits down to slide them on. She kicks of her white rubber rain boots for these sexy, taupe leather, stiletto knee-high boots. It’s cold outside and she’s bundled up in a leather trench coat and gloves. Once she’s got the new boots on, she then pumps and cranks to get the Coronet started. It struggles, sputters, runs some but eventually she kills the battery. Some good shots near the end of smoke coming out of the exhaust in big puffs when she romps on the pedal to rev the engine and those slow rolls of smoke when she’s cranking it.