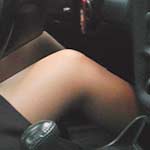 She loves driving this car and loves showing off her pantyhose covered legs at the same time!  She makes a quick pit stop before she hits the road.  She tries opening it up a few times on the highway in between gaps in traffic.  Her white stiletto pumps work the pedals as she flirts with you staring at her legs.