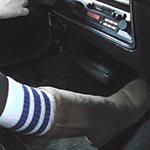 Scarlet and Hana are heading to Kohl’s for a little shopping trip.  They’re taking the Coronet and Hana is going to drive.  It takes a minute to get the cold Coronet running and warmed up enough to go.  Once they get going, it’s hard for Hana to see through the frosted and fogged up front windshield.

One thought on “Hana Driving Coronet in Uggs & Tall Socks”