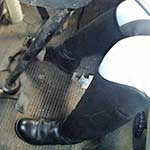 Hana Driving the Bus in Dressage Outfit, 1 of 2

Hana has on her blazer, white/gray riding pants and black leather riding boots. She has a hell of a time getting the old 1971 VW Bus started. She pumps it a lot in between cranks, really priming that old carburetor good! She finally gets it to fire up, revs it up some to clear it out and gets it turned around and on the road. She winds out the gears, using every single rpm the motor has.
This video is picture-in-picture with the main view being from the front windshield on the passenger side while the pip view is from the drivers window looking down at her boots on the pedals. It’s a bit dark so you’ll probably want to turn the brightness up on your player.

One thought on “Hana Driving the Bus in Dressage Outfit, 1 of 2”