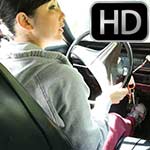 The Coronet needs to be moved from the bushes, tires aired up and driven to Cassandra’s for parking.  This is one of those clips that I just pointed the camera and filmed, letting Hana just do her thing.  Lots of cranking when moving the Coronet around and when she’s driving, she pops it up into neutral some to rev it up while coasting.  It’s a 21+ minute clip, hopefully something for most everyone. 🙂

One thought on “Hana Pedal Pumps the Coronet in Sneakers & Sweatsuit”