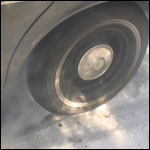 This video was filmed after one of the rare snowfalls we had here in Central Alabama.  Hana came over that next morning to play around in the cars.  This was the first video we filmed.  She’s got a cute snow bunny outfit on as she moves the Blazer out of the way so she can try to rock the Coronet free from it’s icy chains.  If you like the Coronet, sexy girls, tire smoke and snow…you’ll dig this.