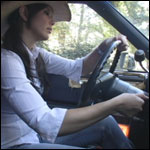 This is the very first video I filmed of Hana about 3-4 years ago.  She gets a real good dose of the raspberries as she tries starting the old Caddy.  It sputters and coughs as she tries to move it from where it’s parked to the driveway.  The battery doesn’t hold up to well either but she’s making light of the rough situation.  Ultimately, she gets the car where it needs to be!

One thought on “Hana ‘Country Gal’ Cranking the Cadillac”