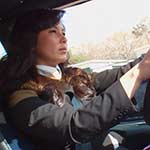 Hana films herself as she cranks the Monte Carlo in her sexy riding outfit.  She pumps the pedal firmly and battles for 6 minutes with the car before finally getting it to start.  She tries to make up for lost time when she hits the road!

One thought on “Hana Very Flooded Cranking & Driving in Riding Boots, 1 of 2”