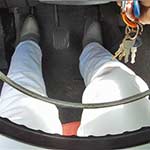 She’s sitting in the old bus putting on these gray boots. They’re a bit small for her and she has to really push and squeeze her foot to get them on. She then walks over to the Volvo where she has one rotten time trying to start this old wagon. Lots of begging but not getting anything other than the middle finger from it.

One thought on “Hana Helluva Day Starting Cars in Gray Boots, 1 of 3”