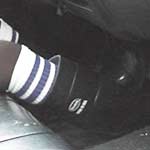 Hana is at the gas station, getting gas for the Monte Carlo.  It’s cold out and she’s trying to stay warm with a big sweatshirt, some tight leggings, knee high socks and a pair of black Boss rain boots.  Once the tank is filled up, she gets in the car and slides her boots off so she can drive back to the house in her socks.  Once at the house, she slips on a pair of brown Ugg boots and does some good ole revving!  After a while, she swaps back to the black Boss rain boots and shows the car who is boss!!