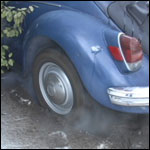 This is the last attempt Hana gave to try and get the Bug unstuck.  Her first attempt (see this link for 3 part series of that attempt) only created some ruts that proved to be too much for the little car to overcome.  Hana’s attempts also made it difficult for Tinsley to get the Bug out (see this link for Tinsley getting the Bug free finally).  So I guess it’s fitting for the last day of the year to come full circle in a stuck series that spanned numerous clips and a two models.  🙂

One thought on “Hana’s Spinning Efforts Don’t Pay Off”