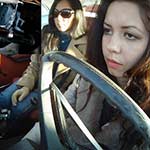 Hana is going to teach Mari how to start and hopefully drive a manual transmission vehicle.  It’s a cold winters day and the girls slip into the Volvo with Hana starting out behind the wheel first.  Hana is having some genuine cold-starting issues with the Volvo and ends up killing the battery.  I, ShisH, replace the battery and Hana gives it another go and is starting to get somewhere as the car is sputtering and wanting to start up.  She figures it’s a good time to put Mari in the hot seat and get her some cold-starting practice using the clutch.  Hana coaches her along and Mari actually gets the car started and running before this first clip ends.  Good teacher or good student?