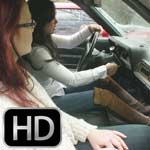 It’s a nasty, rainy day as the girls carefully walk to the Coronet.  They’re gonna go shopping but first have to get their car started.  Hana tries for a couple of minutes but the Coronet just won’t start for her!  She’s getting pissed off and is threatening the car with some serious punishment type revving if/when she gets it started.

Scarlet eventually gives it a try and doesn’t have much luck either BUT she thinks of an old trick to do:  take the air cleaner off.  She reaches under the hood and removes the air cleaner, gets back in and the car finally starts…YAY!  She puts the air cleaner back on and Hana gets back behind the wheel and begins to make good on her threat.  She revs the piss out of the Coronet, making sure it’s good and warmed up before they even think about leaving.   Poor Coronet… 🙁