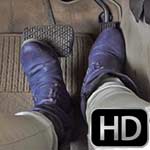 Doesn’t matter what kind of logo or where the car is from, car trouble is car trouble the world over!  Kate finds this out as she gets in her not-so-trusty Mercedes to find that it won’t start.  Lots of pumping in those boots as she’s puzzled why the damn thing won’t crank!  After trying for what seems like forever, the car does fire up and run…roughly.  Not sure if she can trust taking it, she turns it off to see if it’ll start up again but of course not.