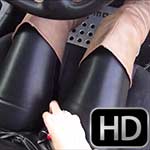 Let’s see which ones will start and which ones won’t, shall we?
Kate gets in the Galant first and after a few tries, the battery is sounding weak. She checks the cables under the hood, gets back in and it fires up! One successful startup out of one attempt. Not bad, now on to the Uno. She fiddles with the battery cables under the hood of the Uno, gets in, pulls the choke, twists the key and VROOM!! Wow, 2 for 2? She revs up the little ‘car that could’ and gives a little backstory of the car when it starts acting up and not wanting to stay running. It stalls a bunch but starts up each time. She fiddles with a choke a bit and then finally decides to take her victory and move along while things are going well.
Next up, the MGF, which we get a walk-around from Kate first. She gets in and will it be 3 for 3??