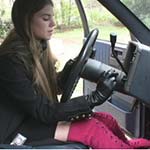 Kristen is leaving for work but feels that someone is watching her.  She gets in the Blazer and with it being as cold as it is, it isn’t going to start very easily.  She keeps looking over her shoulder, concerned that someone (or something?) is there and she keeps trying hard to get her truck to crank!

2 thoughts on “Kristen Cranking the Blazer in Gloves & Boots”