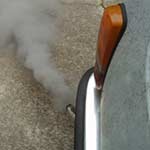 Kristen Runs the Volvo Out of Fuel

The Volvo runs out of gas before Kristen gets it warmed up enough to go to the gas station.  It’s hard to start and when she does get it running, it’ll rev for a bit before it starts backfiring and popping.  Her revving durations get shorter and shorter as the last bit of fuel is sucked out of the tank.  Lots of exhaust ‘ejaculation’ from the exhaust-cam and trouble keeping this wagon running.

One thought on “Kristen Runs the Volvo Out of Fuel”