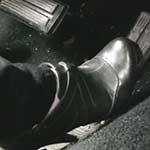 Not sure if the fuel pump is going bad or if it’s so low and parked on the incline is making it not run but the Coronet is not staying running for Kristen. She pumps it to get it started and is able to rev it a little bit before it keeps stalling out on her. She more this happens, the harder she revs the car out of frustration.

One thought on “Kristen Cranks & Revs the Coronet in Ankle Boots”