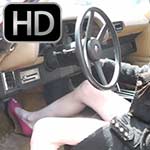 Kristen starts the Camaro in pink peep-toe wedge sandals.  The car keeps stalling on her and makes it difficult to warm up.  She is a master of pumping the gas pedal while keeping her heel on the floor and flexing at the ankle.

3 thoughts on “Kristen Cranks & Revs the Stalling Camaro in Wedges”