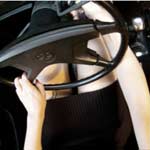 Nyxon Talks Through Her Struggles in the Bug

Played around with a ceiling shot in the Bug when this lovely lady stopped by well over a year ago.  She tries starting the 72 Super Beetle but it’s being it’s typical annoying self.  She talks a lot about her struggles and even teases you a bit, asking if this is what you like to see, her struggling with the car.  Both camera angles are packed into this one 15+ minute clip.

2 thoughts on “Nyxon Talks Through Her Struggles in the Bug”