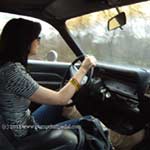 Nyxon Driving the Coronet in Flat Tan Boots, 1 of 2

Ride along as Nyxon drives the old Dodge Coronet around.  She works the pedals in a pair of flat, tan boots that come up just a bit over her knee.  It’s a gloomy day and fortunately for her, the Coronet doesn’t give her any issues but the traffic irritates her a bit as she hates getting behind slow folk!  She voices her frustration with traffic and goes from the gas to brake often.  Just some cruising in traffic, stop-n-go and curvy road driving in this clip.
This clip is entirely from the passenger side.

One thought on “Nyxon Driving the Coronet in Flat Tan Boots, 1 of 2”