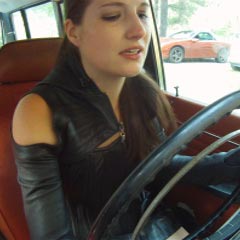 This was a little scenario we were playing around with where Paige is the ‘entertainment’ for some notorious bad guy who she knocks out, takes the keys to his car and tries to get away but the car won’t start.  It’s a little rough and cheesy but we were just toying with the idea to see how it looked.  For you Volvo fans out there, she can’t get the car started!