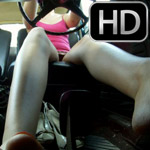 This requested video is of Paige trying to start a car with ignition/battery problems and has to fiddle with the battery to get it going.  She starts out trying to get the car started but she thinks the battery is dead.  She connects the charger to the car and spends most of the rest of the video trying to get the Bug cranked but the ignition doesn’t want to work.  She slips off her shoes to pump the gas pedal barefoot.  The car does spin over here and there during the video but she can’t ever get it to start.