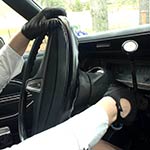 She’s got her sexy little secretary outfit on and she has to run some errands in her old jalopy!  She keeps her driving gloves on for this car because with as much manhandling she has to do to it, it can mess up her soft hands.  She is forceful in her pumping of this old car as she doesn’t want to take any shit from it.  But it’s shit she gets as the old Mopar says, “Piss off!”  ….but, Paige isn’t one to give up easily…