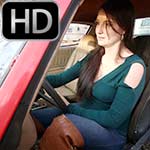 Paige Erin Turner Fiddles with the Engine in OTK Boots

This is more of an outtake clip because of the conversation we have while she’s trying to get the car started. My intentions of filming was to film the startup but with the car being cranky, I just kept rolling in case something good came out of it…which something good DID come out of it, a few nice cranking segments. Of course those were between the english literature segment, vocabulary segment, innuendo segment and her sexually fiddling with the engine segment.