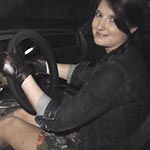 Paige Erin Turner’s Night Plans With You Got Ruined

She was so looking forward to going out with you in her cute little cowgirl outfit but the old jalopy wouldn’t start!!  She’s so bummed that she has to sit in the driveway and spend, like, forever starting this damn car!! 🙁