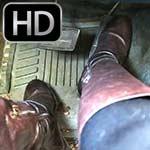 Paige is Pregnant, Has to Leave & Her Car Won’t Start!

Lot’s of errands, appointments and family/friends to see when you’re pregnant.  Paige has quite a few places to make it to and her car is being a piece of shit!  She keeps coaxing it to start, trying to be nice but it’s only responding with the big middle finger!  Ugh!!

**This is our first video filmed with a brand new camera.  Still learning it but so far, I’m very happy with it.**

One thought on “Paige is Pregnant, Has to Leave & Her Car Won’t Start!”