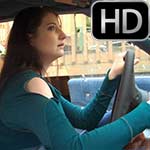 Paige Erin Turner Getting a Workout Cranking the Monte Carlo

Paige gets a leg workout in this clip. She takes a camera out to film herself trying to get the old Monte Carlo cranked up. She’s at it for a while, with no luck, when the starter starts making an odd sound. I come out with another camera and walk up to the drivers door just in time for the battery to go kaput! I swap out the battery for her and film her second attempt from drivers side first before I move over to the passenger side. Yeah, her second attempt with a fresh battery was a failure too.